Fortress is a game mode in Armagetron Advanced. It is a team based game which usually consists of two teams defending their own zone while trying to capture the enemy zone. You can also have up to four teams in one map, fighting against each other.

Proof of concept of Fortress game mode was created by Z-Man, (the game creator.)

The following links are related to early fortress. One day this can be written up as a proper history. 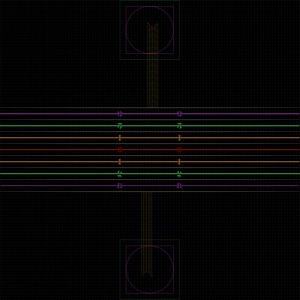 The rounds, matches and scoring.

On most common Fortress servers, the first team to reach 100 points wins the match. Core-dumping your enemy, you receive 2 points which also adds 2 points to the overall team score. Hole points have been recently introduced to some Fortress servers and seems to becoming a standard setting which gives you 1 point which also adds 1 point to the overall team score.

Note: Settings vary from server to server, so this may not be exactly how it is on the server you are playing on. You can try asking an Administrator of the server for more information or use the ` console button and type in the setting to get the variable.

There is a more detailed discussion of Category:Fortress Tactics available.

Positions in Fortress are assigned so:

You can change your position using the chat command:

Where # is the number of the position you wish to take. Using just "/shuffle" without a number, will just shuffle you out to the last position. When you join a Fortress server you will be placed on the very outside, so the others player's position won't be affected. Usually you're not allowed to shuffle "up" (to a lower pos). The most common way to change your position to a lower position is waiting until an inner player shuffles out. (He may be tired of Attacking) or until someone simply leaves the team.

Recently, in some updated servers, you're allowed to shuffle up only once you have logged in through the Armathentication mechanism. However, it is a commonly accepted rule that you ask for your team-mates consense before taking his/her actual position.

Note: expecially for newbies, the inner position the harder it is, since you need to have a bit of experience to know when it is time to split out safely (without killing yourself or, in the worst case, one of your mates)... This doesn't mean that starting from outside is "easy", in fact the outmost player is partially responsibile of letting the defender build the zone protection succesfully.

As you might have guessed, center/centre (or middle) player starts from position #1. The initial phase, after splitting, is quite complicated for him: he has the chance to attack the opponents grinding through their attackers' walls, but he will have to prevent the opponent middle player from doing the same thing... Usually acting in a very tight space. In matches where both teams have 6-7 or more players it can become very hard to survive more than 10-15 seconds.

Attackers start from positions 2 and 3. It is a good practice to try killing opponents' sweepers before attempting to break their defence. A good attacker is able to let his team win very quickly (when his base is well protected, of course). At start they can double grind, a technique that lets them gain a lot of speed, sometimes enough to surpass opponents' sweepers and to reach their base before the defence is completely built. An attacker must have a good timing either to split well after the start, either to beat the enemy defence.

There are usually two sweepers, one for each side: e.g. in a team of 8 players, the defender takes position 8, while sweepers take 7 and 6.

Sweepers are those who at start help the defender building the zone protection. After that, they will try to block the enemy attackers, giving their own mates more time to attack the other base. Sweepers' role is very stressful too, because angry-aggressive attackers will try everything to kill them: a defender being attacked by 2 (or more) attackers is easily going to fail without the support of (at least) one sweeper.

Usually starts from the outmost position, drives along the closest mate's wall until he/she reaches the zone limit. Then begins drawing a square around the zone, as fast as possible. The defender holds the most stressful role in forress. If he dies the round is usually lost. Though sometimes he will be bored while the opponents cannot attack, being attacked themselves by his team.

To go along a wall to gain speed. Almost all Armagetron servers employ a method in which when you "grind" against any wall you gain more speed. Same principle, but in Fortress the setting have been set slightly lower than usual that you will only notice the speed boost when you grind quite close and for at least a few seconds. Grinding is one of the fundamental things in Fortress and everyone demands that you grind your team players and split correctly at the start of each round. If doing anything else, will most likely get you kicked or suspended.

All you need is administrator access on the server to be able to load the Fortress settings. Once you have that just simply type in the admin command line;

If you wish to make the server permanently Fortress, all you need to do is add that command in your configuration so it automatically runs as soon as the server starts. With this, it'll try to be an exact clone of "CVS Test Server: Fortress". You're advised to rummage through the included file here and the other recursively included files. Copy those you want to adapt into your configuration file and modify them there. You'll no doubt notice there's a great deal of customization available. Think of the fortress as a primitive game object, and these settings are how you'll define its behavior. Between these settings, other game rules settings, and good map design, there are virtually limitless possibilities available. You don't have to limit yourself to Fortress play, you can use the fortress however you'd like! Conquering times:

To set up a one-on-one time to be tutored by some of Fortress' best, you can add yourself to the student list in The Academy