Difference between revisions of "Grinding"

Grinding is used to describe a specific maneuver in Armagetron Advanced, and is usually the only way to make your cycle accelerate in-game. Due to this, grinding is one of the most important basic tactics to learn if you are going to gain any advantage over your opponents.

The Definition of Grinding 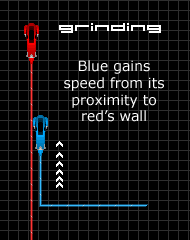 Fig. 1 An example of grinding

Grinding tends to be easier in an online game, where rubber aids in driving as close as possible to a wall. In a local game configured for very low rubber though (in the absence of network latency), grinding is a much more difficult skill to master.

Fig. 1 right, gives a theoretical example of grinding against an opponents wall:

Although the acceleration gained from grinding is undoubtedly very beneficial in a game where your only weapon is the trail left behind you, it does decrease the amount of time that you have to react to certain situations. In the example given above, if the red player suddenly turned to the right and 'boxed in' the blue player, blue would have far less time to both see the turn and to react to it in time to avoid driving into the resulting perpendicular wall. For this reason, grinding an opponents wall and trying to overtake them is tantamount to in-game suicide.

Grinding More Than One Wall

The effect of wall-acceleration can be amplified by grinding between two walls. This is sometimes called a launcher or slingshot and players can often end up gaining a huge speed boost using this method, allowing them to quickly box in other players.

Some maps may have acceleration enabled on the Rim Walls too, allowing players to grind the outer wall of the grid to gain speed. This speed boost can also be compounded by grinding 'outside' a cycle wall, up against the grid wall.

This does have an interesting effect in servers that have a large factor of outer wall acceleration set, and you should be wary. If a wall that you're grinding that is is close to the rim wall suddenly disappears, you'll experience a huge and unexpected increase in speed from the rim wall. Note: rim wall acceleration is a rare feature.

Not only is grinding an essential skill when attempting to best an individual opponent, but it must also be employed in a team game, where a faster team can easily overrun a slower one. In a team game, you should always attempt to grind at the start of a round to give your team the benefit of speed.

Further information on this and other tactics can be found on the Teamplay page.

The Relationship Between Grinding and Rubber

As grinding against a wall often requires very precise timing, Rubber can play a big part in getting closer to a wall. Rubber effectively allows you to drive your cycle 'deeper' into the wall (See digging), and gain a better grind.

Depending on server settings, this effect is often used over and over by players to create a slingshot for themselves by repeatedly turning 180 degrees against a wall and grinding deeper and deeper against it. In earlier versions of the game, this could sometimes lead to a player 'breaking out' of the playing arena into the limbo beyond, however this bug has been fixed since version 0.2.7.0 of the client.